National Workshop for Master Trainer on - angikaar-A Campaign for Change Management under PMAY(U) was held on 5 th September 2019 at Gulmohor Hall, India Habitat Centre, New Delhi. The objective of the National Workshop is to converge with other schemes specially Ayushman Bharat and Ujjawala Missions. It is to create awareness on best practices of water and energy conservation, waste
management, health and hygiene, tree plantation and environment protection. There were more than 130 participants from different states,  Ayushman Bharat Mission, IOCL, NIC and PMU officials from Ministry of Housing and Urban Affairs, Government of India. At the outset Mr. Amrit Abhijat, Joint Secretary and Mission Director of PMAY(U), Ministry of Housing and Urban Affairs, Government of India has welcome the participants of the day to the workshop and delivered the Inaugural Address. He mentioned about the acceptability and adaptability of angikaar to the PMAY(U) mission, started 3.5 years back. In this process, convergence with other schemes should be taken care of through MIS and IEC strategies. Members of civil society, students, volunteers to be involved as a part of this initiative. SLTC, CLTC
and ARP (angikkar Resource Person) are the key persons at ground level to implement angikaar. It is described as 3 months campaign by JS&amp;MD, PMAY(U).There were 4 presentations from PMU officials from Ministry of Housing and Urban Affairs, Government of India on -Campaign for Change, Social Change Management, IEC and Door to Door Campaign. Also, there was a complete technical session on- MIS, Mobile application, Convergence with Ayushman and Ujjawala schemes with PMAY(U) through angikaar. Speakers from Ayushman
Bharat and IOCL were present to explain the possibilities of convergence with angikaar. Interactive session with states at the end of the workshop made the concept of angikaar clearer to States. Concluding remarks has been given by JS & MD, PMAY(U) to complete the workshop.

Ministry of Housing and Urban Affairs, Government of India

Copyright© 2019 ministry of housing and urban affairs, Govt. of india, All rights reserved 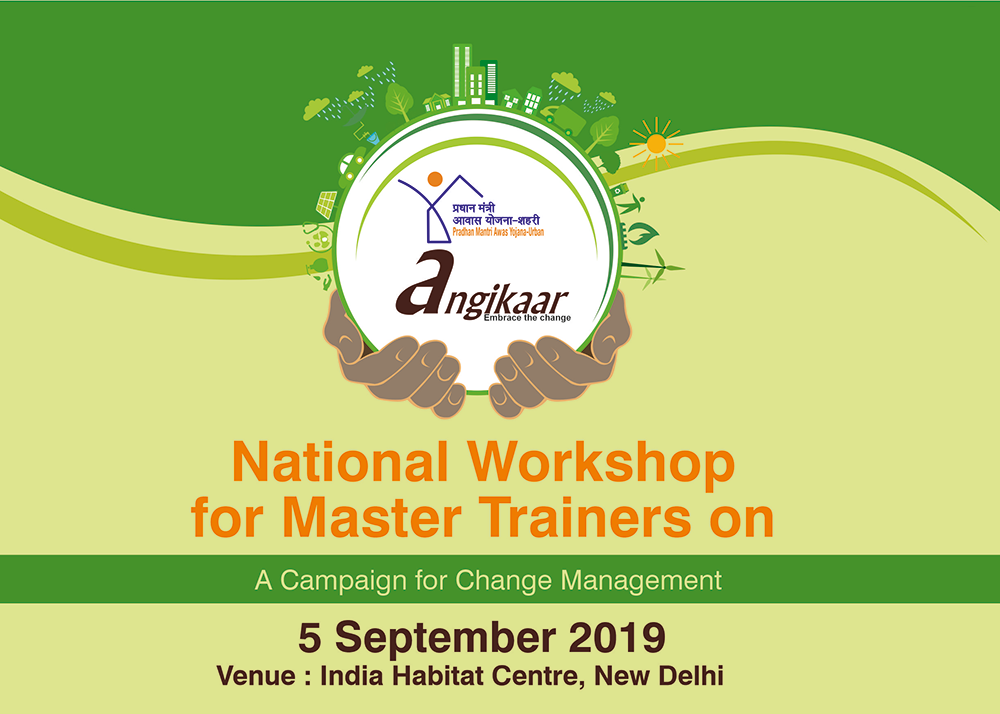